Enjoy the appealing frontier atmosphere at this ancient whaling capital and base for expeditions to the North Pole.

Skarsvag is situated in the northern point in Norway, and belongs to the municipality of Nordkapp. Skarsvag is inhabited by a population of 60 friendly locals. It is a charming little village that is said to be the northernmost fishing village in the world.

Svolvaer is the main town of the Lofoten Islands in northern Norway. It is on the southern coast of Ostvagoya, the easternmost island of the group. The rugged and bleak countryside around Svolvaer has attracted both tourists and artists, and the town has become something of an artists' colony.

Svolvaer is the main town of the Lofoten Islands in northern Norway. It is on the southern coast of Ostvagoya, the easternmost island of the group. The rugged and bleak countryside around Svolvaer has attracted both tourists and artists, and the town has become something of an artists' colony.

Visited by kings, emperors and travelers alike, the mystery of Mount Torghatten has mesmerized many people from all over the world. Torghatten is a mountain with a hole right through it and it's not just a famous landmark, but a an opportunity to trek its granite armour. According to legend, before the light of dawn, a disappointed troll by the name of Hestmannen, who was in love with a young girl named Lekamoya, shot an arrow after her as she ran away from him. The mighty Troll King of Mount Somnafjellet saw this act so he threw his hat between the girl and the arrow, creating the hole. As soon as the first ray of light rose and peeked from the sky, all in it's path turned into stone.

The region is famous for its beautiful scenery with high mountains and blue fjords, of which the Geiranger fjord is one of the most attractive tourist places in Norway. The climate is less severe than might be expected from its geographical location, with mild winters and cool summers. Ålesund, with its unique architecture, is the center of business and industry in Møre and Romsdal. As the sea, the woods and the mountains are easy accessible, the possibilities for outdoor and sports activities are excellent, both in the summer and winter season.

Flåm­ is the destination of the 12-mile branch line of the train from Myrdal, a 50-minute ride that plummets nearly 3,000 feet into Flåm­ Valley. The tiny village lies at the end of the Aurlandsfjord, amid meadows and orchards, surrounded by towering mountains. A trip on famous Flåm­ Railway is a thrilling experience. Its track took four years to complete and leads through breathtaking mountain scenery, past cascading waterfalls and through hand-dug tunnels. At one point the train travels through a reverse tunnel in order to negotiate a gradient of nearly a thousand feet, making it one of the steepest anywhere in the world. It operates year-round - a great tourist attraction during the summer and a local lifeline during deep winter. Strolling around the few souvenir shops or walking in the picturesque Aurland Valley are popular pastimes. Guests interested in exploring on their own would enjoy a hike in the countryside. The picturesque setting among orchards and meadows draws visitors to this serene and peaceful place.

With its spectacular setting among seven hills, Bergen is one of the most beautiful and enjoyable cities in Norway. Most sites are within an easy walk from the harbor. From fine surviving medieval buildings to a series of good museums such as Fishery Museum and Old Bergen open-air museum, Bergen offers a wide variety of attractions. Its scenic beauty can best be appreciated from Mt. Floyen and is captivating. Enjoy this lovely city by taking a stroll to the old part of town, passing impressive 12th-century Bergenhus fortress. Old Hanseatic Wharf, called Bryggen, is where reconstructed gabled buildings house workshops, boutiques and restaurants. St. Mary's Church is Bergen’s oldest building and one of the finest Norman churches in Norway. Rasmus Meyers Collection is a rambling townhouse featuring one of the best collections of Norwegian art, including an upper floor devoted almost entirely to Munch. Bergen boasts numerous historic buildings dating from medieval times: Bergenhus Fortress; Rosenkrantz Tower; Haakon’s Hall.

Bergen and its outskirts tour – 5 Hours

The Shetland Islands are Great Britain's most northerly islands, situated nearly fifty miles northeast of the Orkneys. Lerwick is the capital of the principal island of Mainland and is Britain's most northerly town. Founded on the fishing industry and with strong Viking connections, little now remains of the old village of Lerwick. Features of interest include the Cromwellian Fort Charlotte and annual Norse fire festival, Up-Helly-Aa, held every January. On the southern tip of the island is Jarlshof, site of ruins of several Stone Age and Bronze Age dwellings as well as wheel-houses from the Iron Age. Elsewhere on the island is Clichimin Broch, another prehistoric site containing a Bronze Age fort.

The Orkney Islands are different from mainland Britain and reflect the original 9th century Viking settlement. In addition to Norse heritage are remains of prehistoric monuments such as Stenness Standing Stones at Finstown. Steep-roofed stone houses line streets winding around medieval St. Magnus Cathedral. A museum featuring Orkney artifacts is housed in 16th-century Tankerness House. Other attractions include Maes Howe, Britain's best-preserved megalithic tomb, and the stone-age village Skara Brae. Rock circles, cairns, standing stones, ancient tombs and prehistoric villages are scattered about, gaining these islands international recognition. Only the walls and tower of the 12-century residence, Bishop's Palace, stand. The top of the tower affords a great view of the cathedral and across Kirkwall rooftops. Earl's Palace dates from 1600. Its style blends medieval fierceness with elements of French Renaissance architecture - featuring dungeons, massive fireplaces and magnificent central hall. A good mile south of town is Highland Park - the "most northerly legal distillery in Scotland."

Dominated by the ramparts of Edinburgh Castle, this picturesque city offers shopping on Princes Street, the grandeur of the Royal Mile, St. Giles Cathedral and historic Palace of Holyrood House, where Queen Mary lived and many Scottish kings were wed. Or you could venture across the moors to marvel at the scenic Highlands.

Dominated by the ramparts of Edinburgh Castle, this picturesque city offers shopping on Princes Street, the grandeur of the Royal Mile, St. Giles Cathedral and historic Palace of Holyrood House, where Queen Mary lived and many Scottish kings were wed. Or you could venture across the moors to marvel at the scenic Highlands.

Greenwich is a borough of London in southeastern England. It is most known for being the site of the prime meridian, or 0 longitude, which passes though the Greenwich Observatory.

Greenwich is a borough of London in southeastern England. It is most known for being the site of the prime meridian, or 0 longitude, which passes though the Greenwich Observatory. 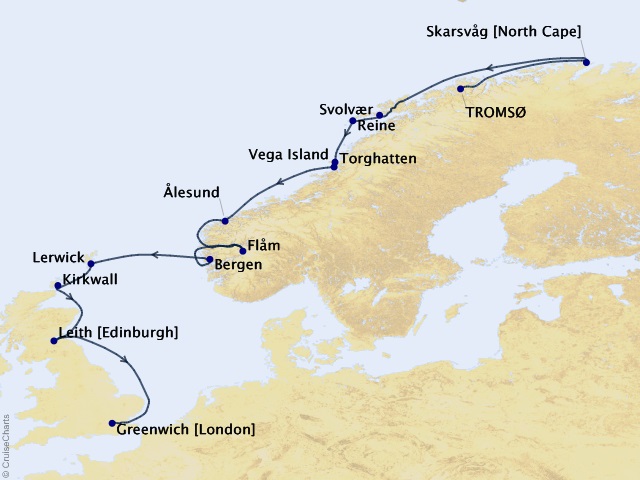 Cruise port, security and handling fees of $650, transfers, airfare, government fees and taxes are additional for all guests.

Available Addons:
Remarks:
Yacht Cruise-Only Fares are per person in U.S. dollars, double occupancy and do not include cruise port, security and handling charges. All offers may not be combinable with other promotions, apply to first two full-fare guests in stateroom or suite, are

All prices per person and in USD unless otherwise stated.
Offer ID:
1341917