LET US HELP YOU PLAN - CALL

Marseille is a vibrant, cosmopolitan port in the Provence region of France. Craggy mountains provide a spectacular backdrop. As a Mediterranean melting pot, the port virtually rubs shoulders with intimate, picturesque old harbor, the Vieux Port. Packed with watercrafts, this is the heart of Marseille. Two fortresses guard the harbor: Fort Saint Nicolas and Fort Saint Jean. Several vantage points offer spectacular views, including the impressive Basilica Notre Dame de la Garde - a prominent landmark overlooking the city that is crowned by a monumental, gilded statue of Virgin Mary. Marseille boasts numerous fine museums well worth a visit. Sitting at one of the many outside cafes or strolling the streets of the old port area lets you experience the unpretentious charm of this city. Other sights include Chateau d'If - a 16th century fortress-turned-prison; Basilica St-Victor - Marseille's oldest church with the appearance of a fortress; and La Canebiere - a broad boulevard with everything from hotels to cafes and shops.

Collioure is on the Languedoc coast, just north of the border with Spain. Originally a quiet fishing village, Collioure began to attract several famous artists in the 20th century including Matisse, and Pablo Picasso. The town offers a couple of beaches, vineyards, and picturesque mountains. There are two particular sights in the town. The church, Notre-Dame-des-Anges, sits almost in the harbor and its bell tower previously acted as the lighthouse. The second sight is the Royal Castle, which was once occupied by the templar knights. Also popular with visitors is the seafood restaurants along the waterfront - Collioure anchovies are especially highly regarded.

Tarragona is a port on the Mediterranean Sea on the Catalonian coast to the southwest of Barcelona. The monks of the Grande Chartreuse established their liqueur distillery here in 1903, when they were forced to leave France. The city's archaeological museum has an outstanding collection of Roman statuary. The remains of a Roman amphitheatre and defensive walls are in the city, and a two-tiered Roman aqueduct is nearby. The Romanesque cathedral, construction of which was begun in the 12th century, is famous for its Gothic facade. Nearby are the beaches and resorts of the Costa Dorado.

Valencia is one of the biggest, liveliest cities in Spain. It is located at the Mediterranean sea with beaches right in its heart that offer every kind of sports. With its active nightlife and various cultural offerings, Valencia is one of the most dynamic cities in Spain. One of the most famous buildings in Valencia is the Cathedral and its tower named, "El Miquelet" (Little Michael) which was built between 1381 and 1424. Try Spain's most famous food right where it was born: "Paella Valenciana". Valencia is the city where "El Cid", Spain's national hero, fought against the Moors, and popular festivals in the city and many villages around still remind of this epoch.

Valencia is one of the biggest, liveliest cities in Spain. It is located at the Mediterranean sea with beaches right in its heart that offer every kind of sports. With its active nightlife and various cultural offerings, Valencia is one of the most dynamic cities in Spain. One of the most famous buildings in Valencia is the Cathedral and its tower named, "El Miquelet" (Little Michael) which was built between 1381 and 1424. Try Spain's most famous food right where it was born: "Paella Valenciana". Valencia is the city where "El Cid", Spain's national hero, fought against the Moors, and popular festivals in the city and many villages around still remind of this epoch.

Today Spain's major commercial port and naval base, Cartagena lies on the coast of Murcia, its great indented bay guarded by rocky promontories, each topped by a fort. The city contains the remains of old walls, a castle constructed probably in Carthaginian times, and a church that was formerly a 13th-century cathedral. Attractive promenades extend along the harbour, while to the northeast is the famous beach and watersports resort area of the lagoon-like Mar Menor.

Gibraltar is the famous promontory located at the western entrance of the Mediterranean, with Spain to the north and, across the Straits, Morocco to the south. The Straits are a channel connecting the Atlantic with the Mediterranean. Africa is clearly visible on a fine day. In ancient times, the Rock, as Gibraltar is popularly called, and its counterpart on the African side, Mount Abyla, were known as the Pillars of Hercules. Visitors enjoy historical sites, magnificent views and beautiful beaches. A favorite pastime is strolling along Main Street to browse and shop in the duty-free shops or stop in one of the pubs. Many visitors come to see Gibraltar's curiosity, the Barbary Apes. According to legend, the British will remain as long as the apes survive. Alemeda Botanical Gardens is where the British troops mustered for their parades. Trafalgar Cemetery was named for the casualties of the Battle of Trafalgar. On the fringe of the downtown area is the Cable Car Base Station where the car runs to the rock top.

Cadiz is an old city with Andalusian character. The magnificent Baroque cathedral and impressive mansions were built with gold. Cadiz’s modern-day treasure lies 30 minutes to the north in the rolling hills of Jerez - where production of the liquid gold, as the famous sherry is often called, ensures a booming economy. Visit one of the bodegas for a tour and tasting. The Historic City Center of Old Cadiz is a pedestrian zone for a pleasant stroll. The monument to "Las Cortes" is the Spanish Parliament established in Plaza de España. The 18th-century golden-domed Cathedral of Santa Cruz looms over the whitewashed houses. The dazzling interior contains a magnificent collection of sculptures and art objects. The Museum of History features an outstanding model of Cadiz in ivory and mahogany that illustrates what the town looked like at the end of the 18th century. The small, colorful Flower Market offers much local flavor. The Moorish-style Alameda Apodaca Gardens serve as a reminder of the Moors’ occupation in past centuries. 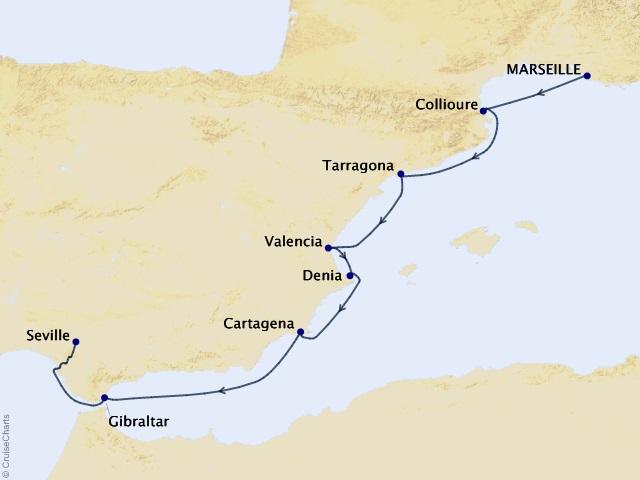 Fares are per person, based on double occupancy. Government, port, document issuance, handling & service fees, transfers and airfare (unless otherwise stated) are additional for all guests.

All fares are quoted in US Dollars.

All prices per person and in USD unless otherwise stated.
Offer ID:
1354758